Sunday, June 9th, 2019 started much like any other day in Dallas, Texas. Sure, storms were in the forecast that afternoon, but without any tornado warnings, residents expected to be able to go about their day as usual.

By mid-afternoon, the Dallas landscape was permanently changed. Wind speeds up to 70 miles per hour were more than enough to topple countless mature trees onto power lines, cars, and homes. And every tree service in the Dallas and surrounding areas readied themselves for the onslaught of calls.

The next day, Blue Ox received a message from one of our favorite Fort Worth clients. Her parents lived in Dallas, and a large tree had fallen onto their house. Every Dallas tree company suddenly had a wait of at least three days, and this project was urgent since the tree was laying directly above the homeowners' bedroom. Even though Blue Ox’s service area doesn’t typically include Dallas and despite the fact that we rarely take on storm damage due to our usually overflowing schedule, could we help?

I imagine these sorts of phone calls are dreaded by any company running only one crew—I know that Laura certainly dreads them. The fewer crews a company has operating, the less flexibility they have with their schedule. A one-crew company like ours can only be in one place at a time. Which means that when an emergency job pops up on the radar, the only two options are to send the new client away to one of our competitors, or to reschedule a handful of other jobs to fit them in (which might just result in our previously scheduled clients seeking out our competitors on their own in aggravation).

But how could we ignore a request like this?

So we all agreed to try to reschedule a half-dozen projects that had been waiting on our schedule for a week or longer.

Blue Ox is truly lucky to service some of the best clients any business owner could hope for: passionate and generous, flexible and understanding. Everyone who Laura called to reschedule had read about the storm on their news feeds, or had seen the destruction that had occurred in Dallas on TV, and each and every one of them brushed off our apologies and told us that they could certainly wait while this Dallas couple had a tree removed from on top of their house.

And so on the morning of Tuesday, June 11th, the Blue Ox crew rolled into the limb-filled streets of a ravaged Dallas suburb to get started on this particular removal. And we were not alone...

The extent of the devastation was daunting, but even more impressive was how many tree crews were working around us already. It made me wonder how many chainsaws were running in Dallas at that very moment. I certainly couldn't even count how many I was hearing when I stepped out of the truck. 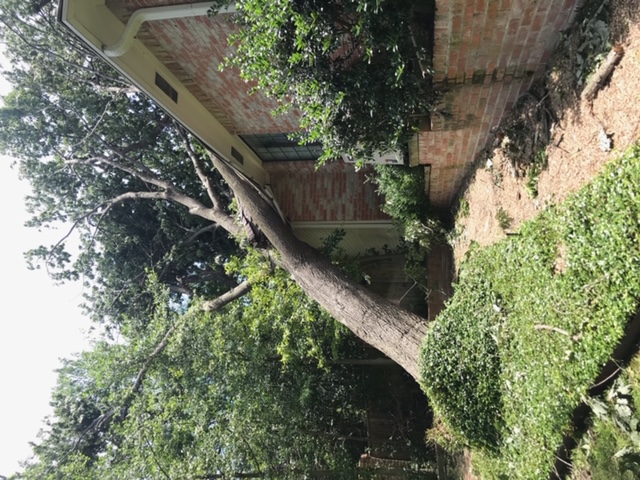 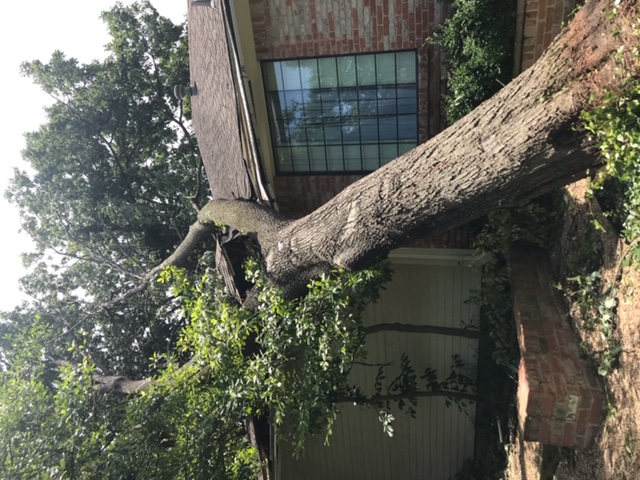 Based on just these photos taken by the homeowners, John and I estimated the tree could be removed in one long day along with the help of some heavy machinery that we would rent to complete the job. The following series of unfortunate events doubled that time in the end...

Our first mistake was bidding the work based off the pictures. I almost never bid or even make recommendations based off pictures alone for a number of reasons, the main two being that 1) important information is not always captured in pictures; and 2) the information that is gathered can often be deceiving. But due to the urgency of the situation, I didn't have time to make a run to Dallas before getting the crew on site, so we were forced to ballpark.

Unfortunately, these pictures were no different than any others. We slightly under-estimated the size of the tree, but we were also caught off guard by some other factors that were not even captured in the pictures and definitely increased the difficulty of the removal. Mainly, the fact that the top of the tree was hung up in two other trees, one of which was broken, adding yet another hazard to this already hazardous situation.

Still, we were optimistic, so we found room on the crowded street and got started. It was already mid-morning due to the long drive from Fort Worth, and the need to stop by an equipment rental facility to pick up the lift that would aid in this project.

As it turned out, we were unable to get the lift close enough to the tree to help with its removal as much as I had hoped (just another factor I could have spotted ahead of time, had I gone in person to bid the removal). Nevertheless, John and I were still glad to have the lift. Even though it didn't speed things along, and the majority of the tree still needed to be climbed, it did help slow our rate of exhaustion somewhat.

After completing what we could with the lift, I climbed out of the tree to work from the ground, and there I was besieged by an entirely unforeseen delay. Neighbors!

Understandably, everyone in the neighborhood was concerned about the state of their own trees and, having spotted us working nearby, decided to come over for answers to their questions. But storm damage is some of the most dangerous and unpredictable tree work, requiring your complete attention, constant planning and re-planning, as well as uninterrupted communication between workers both on the ground and in the tree.

So naturally I had no time at all to stop and look at someone else's property, and even less patience for having someone in my hazardous work zone who had no PPE or job-site awareness. Yet throughout the rest of the afternoon, I had to shoo potential clients off the job site, explaining over and over that in order for me to look at their trees, they'd have to call the office and set up an appointment.

It was clear by this point that we were going to need another day on site. But with a tight schedule and lots of waiting clients, we planned to press on as late as light would allow. We ordered pizza for the crew, as we usually do when we know it's going to be a late night. Although we were completely exhausted, spirits were looking up as we neared the end of the brush removal and it started to look like we might get the tree off the house that night. Or so we thought...

The tree was located right on the property line, and I was thankful for the neighbor's understanding about our need to utilize his lawn for access. I was especially glad that he had a large, sturdy tree right next to the fallen tree that we could safely use for leverage. We set about installing a 3:1 pulley system in the standing tree which we intended to use to tip the fallen trunk off the house. But before we could get everything in place, the neighbor came out to express his concerns.

Of course it was completely understandable for him to want to seek reassurances that his tree wouldn't come down, too. But before I could get to him to discuss the situation, one of our employees--tired and frustrated from a long, hard day--issued an unacceptably sarcastic remark instead of treating the neighbor in his usual respectful and honest manner.

Bad timing to say the least.

The conversation turned tense and the neighbor unresponsive quicker than I could blink, and that stopped production for the night. It was easy to smooth things over and clear up the misunderstanding with the neighbor, but our favor had run out and we had to come up with a new plan for the trunk. At this point, John and I decided that a little sleep and a fresh start the next morning were exactly in order.

Before getting back in the game, John and I had to strategize.

Over the phone that morning, we decided that instead of the only-partially-helpful lift, we'd bring in a SkyTrak Telehandler--a larger piece of equipment capable of lifting a tremendous amount. The only problem would be that we'd have to drive it on the neighbor's lawn in order to access the fallen tree.

In my years working in the service industry, I've learned that client relations are just as important as providing quality work. And I've learned that everyone--clients and colleagues alike--respond well to transparency, honesty, and a positive attitude. So, armed with that knowledge and boosted by a silent self-pep-talk, I began a fresh line of communication with the neighbor about our need of his lawn. It took some honest apologies regarding the events of yesterday evening and an abundance of understanding on the homeowner's part (for which we're still so grateful), but we came to terms and got our new plan locked in place.

After the events of the previous day, and knowing that the remainder of the job would mostly be operating machinery, John and I decided to offer the crew the day off and planned to finish the project alone. Laura joined us later on in the morning to offer moral support, she said. But we put her to work in the driver's seat of the SkyTrak while John got up on the roof to make the final few cuts and I stayed close to the house to be his eyes from below.

I think I speak for John and Laura, too, when I say there is no vehicle or piece of equipment in our arsenal that we value more than those hardworking employees who help make our company run as smoothly as it does. They show up every day with great attitudes, solid work ethics, and no complaints. And yet there was something about it being just the three of us on site that day, working side-by-side, that was pleasant. Something grassroots. It's a special opportunity we three have, to be partners in business but to also be able to solidify that partnership through manual labor sometimes. Knowing we could keep things running just with our own six hands—though of course we hope it never comes to that—is immensely comforting.

At last, it was time to lift the remainder of the trunk away from the house, cut it up, load it up, and be on our way. John and I were pretty excited to float a full tree trunk using our hardworking SkyTrak. It's not every day you get to see 5,000 pounds of tree hovering a few feet off the ground. Not to mention, pulling the tree up without causing any more damage required some pretty serious strategizing and we were glad to have it done. So we took some extra time for a photo op.

Good ol' SkyTrack also hoisted the entire root ball straight out of the ground with zero cuts required (thanks, sadly, to the root rot which was the main reason this tree tipped up in the first place). Video below courtesy of Laura.

It was a long couple of days. And it resulted in a long couple of weeks playing catch up with all those fantastically flexible clients who agreed to let us fit in this last-minute removal. It was the kind of project that tests tempers and tools alike. It was definitely one of those situations that I would describe as "wading through mud" (both figuratively and literally).

But we got the tree off the house; we caught up on all our regularly-scheduled projects without a hitch; life went on and lessons were learned; trees grew, were pruned, toppled, were removed. And I was reminded yet again that wherever we are are in life and business, however we're feeling at any given moment, there will always be more tree work to do....Both a comforting and terrifying thought.

Climb a Mile: A Day in the Life of an Arborist, An Introduction